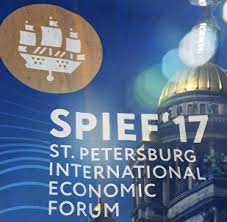 The International Economic Forum of Saint Petersburg took place from June 1 to 3, 2017.

For the past few years the Forum has strengthened its position and become a recognized platform for discussion on a global level, open to dialogue among participants on crucial topics of contemporary life.

3 days of intensive work with more than 14,000 participants, contracts signed for the total amount of 1,818 trillion rubles, i.e. 28,38 billion euros (contracts whose sums do not represent a trade secret).

CCIS-EXPERTISE has taken great interest in such an important event and could not stand aside. In particular, Olga Michau, Director of CCIS-EXPERTISE, participated in the "Russia-France" round table on the first day of the Forum. Many questions and many issues were raised: What are the new horizons of the Franco-Russian collaboration taking into account the results of the French elections? Are there many possibilities for mutual collaboration between France and Russia - are they all exploited? Are there any perspectives for the cancellation of sanctions in trade and finance? How do the sanctions influence the industry of two countries?

Each participant expressed the will and the need for Franco-Russian collaboration.

Oleg Belozerov, President, Chairman of the Board, Russian Railways

Igor Drozdov, Chairman of the Board, Skolkovo Foundation

Andrey Filatov, Chairman of the Board of Directors, Tuloma Investment Company LLC

Andrey Guryev, Chief Executive Officer and Chairman of the Management Board, PhosAgro

Patrick Pouyanne, Chief Executive Officer, Chairman of the Board, Total

Valeriy Draganov, Chairman of the Board of Directors, Coalco Development

Ghislain Lescuyer, Chairman of the Management Board, Saft

Gerard Mestrallet, Chairman of the Board of Directors, ENGIE Group

“The duty of the authorities is not to interfere with business interests but to create appropriate conditions, preferably ideal conditions”. ANATOLY ARTAMONOV, Governor of Kaluga Region

“The common goal of Russia and France is to develop hi-tech entrepreneurs”. IGOR DROZDOV, Chairman of the Board, Skolkovo Foundation

“Sanctions provide opportunities to work on improvement and a promising future”. ANDREY FILATOV, Chairman of the Board of Directors, Tuloma Investment Company LLC

“Despite the sanctions, there is big potential for cooperation. I hope the new pragmatic administration will realize this potential”. ALEXANDER SHOKHIN, President, Russian Union of Industrialists and Entrepreneurs (RSPP)

“After localization, our priority is innovation with the creation of smart energy and application of software for oil and gas optimization”. JEAN-PASCAL TRICOIRE, Chairman, Chief Executive Officer, Schneider Electric

“We joined a $10 billion project of developing the infrastructure to ease export of Russian gas to Europe”. ISABELLE KOCHER, Chief Executive Officer, ENGIE